FEVE fluoropolymer topcoats were developed in 1982, and are applied to various steel and concrete structures. Amongst other common topcoats, FEVE was proven to give the best weathering performance.

Accelerated testing was conducted by an electro chemical impedance measurement before and after accelerated testing, in a sunshine-weather meter (SWM) and in a salt spray test. The smaller the change in impedance is, the better the corrosion protection by the coating system. 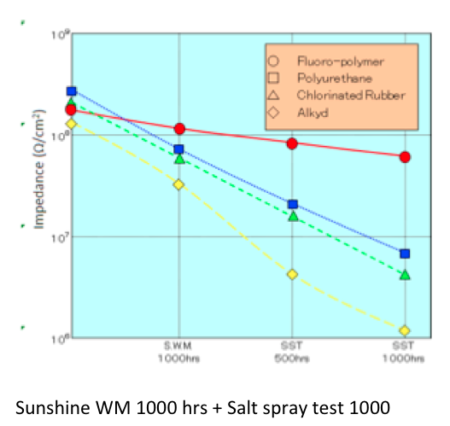 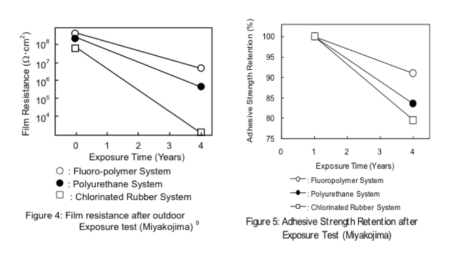 When placed in various liquid chemical environments, the film appearance, rusting, blistering and cracking were observed. Again, the fluoropolymer coating system was superior in both laboratory and marine environments.

Weatherability was measured by the thickness of the topcoat over 15 years. Fluoropolymer resin was observed to have lost 1.1 ?m of coating and polyurethane lost between 22-28 ?m.

UV light tests also provided evidence of a significant difference between UV light resistance of the fluoropolymer compared to the polyurethane.

Since the introduction and early adaptation of fluoropolymer coatings in structures in Japan, it has been adopted by the Japanese Road Association for use in all steel bridges, regardless of environment. It has proven to be an excellent coating material that surpasses the performance of preceding topcoats in terms of durability, weatherability, exposure and corrosion resistance. These characteristics lead to less maintenance and replacement over the life of a structure. Despite the higher initial cost of fluoropolymer resin when compared to the polyurethane and chlorinated rubber, the life cycle cost is subsequently lower.