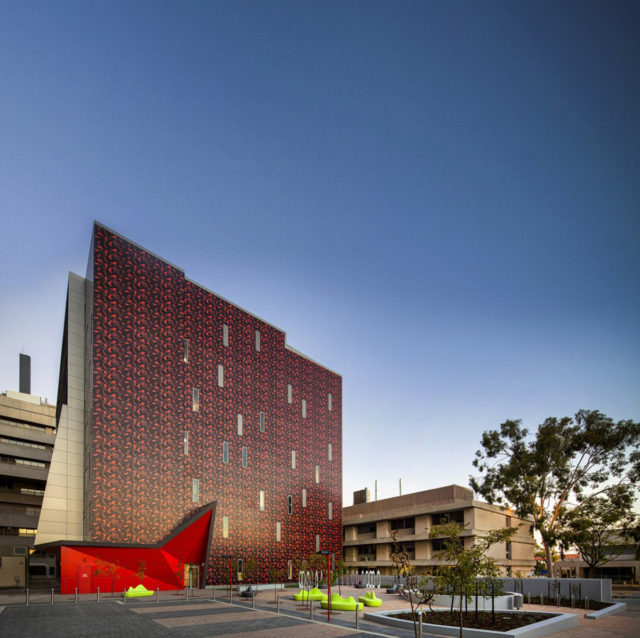 When developing a strategy to implement, while building the new PathWest Laboratory, accessibility to the project site and constructability were two factors that were prioritized. PathWest was the first project of its kind, a major development that occurred in the heart of a busy university medical campus. Built within the confines of the Queen Elizabeth II Medical Center (QEII) in Nedlands, West Australia, the architects at JCY noted it was, “…the first project to be undertaken in a major expansion of health and education facilities which includes both the Department of Health and the University of Western Australia.”

The final product, a six-story building covering approximately 86,100 square-feet, reached completion in 2015. During construction, special attention was given to space and time constraints. The usage of heavy machinery was minimized due to the fact that such equipment would occupy space and inevitably result in traffic delays and lane closures, therefore disrupting the entire campus. In addition to reducing the usage of heavy machinery, the implemented strategy also required quick and effortless assembly. This particular plan would allow future expansions to proceed seamlessly, as the western portion of the laboratory was designed so that any new additions can easily be “clipped-on.” 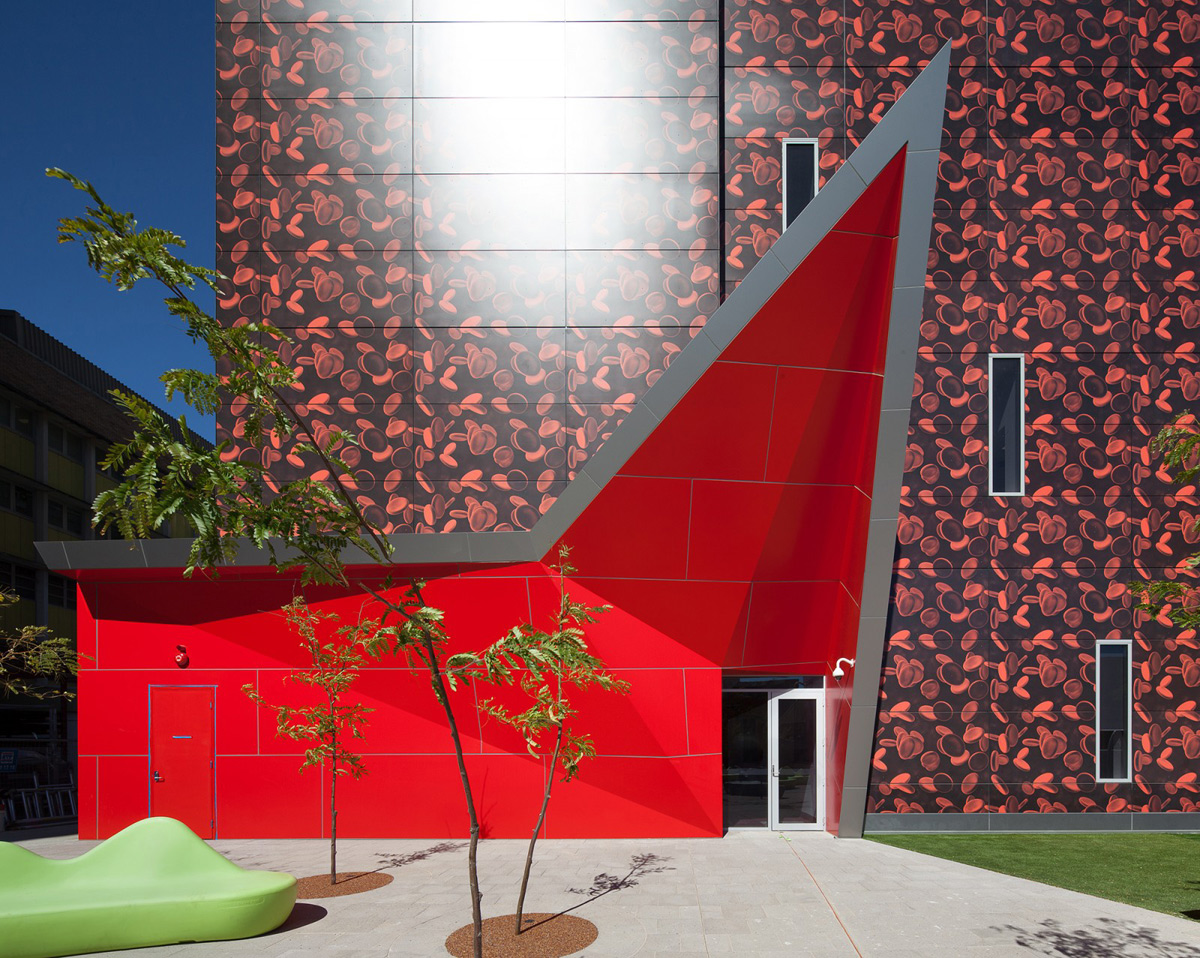 The exterior of the building donned a unique and eye-catching design. Any attention given to PathWest was credited to its façade; the majority of the building is enveloped in fiber cement panels that are embellished with an abstract, dotted pattern reminiscent of red blood cells. The dark background on the panels paired with the specks of red from the blood cells is juxtaposed with the bright, angular details adorning PathWest’s entrance that resembles a heartbeat. 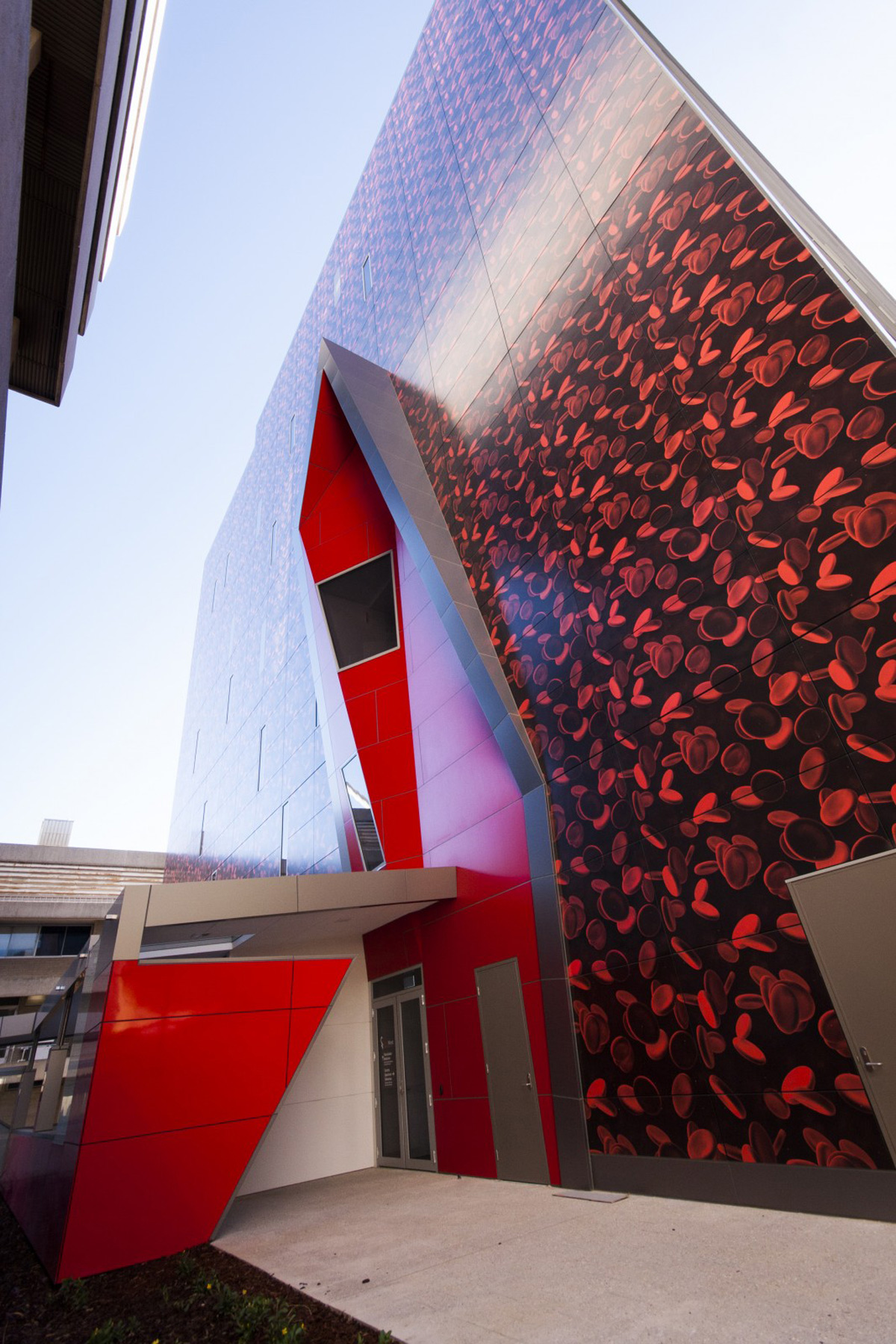 The fiber cement panels donning the striking design were prefinished with A&I Coatings‘ Vitreflon, a fluoropolymer that utilized Lumiflon FEVE resin. The FEVE-based coating offered PathWest a plethora of benefits, which ultimately reduced the lifespan costs of the building. Renowned for its color and gloss retention, weatherability, and longevity, Lumiflon-coated surfaces do not chalk or fade when exposed to UV radiation, salt, and water. Because of these characteristics, PathWest’s unique façade will remain in pristine condition for decades to come.