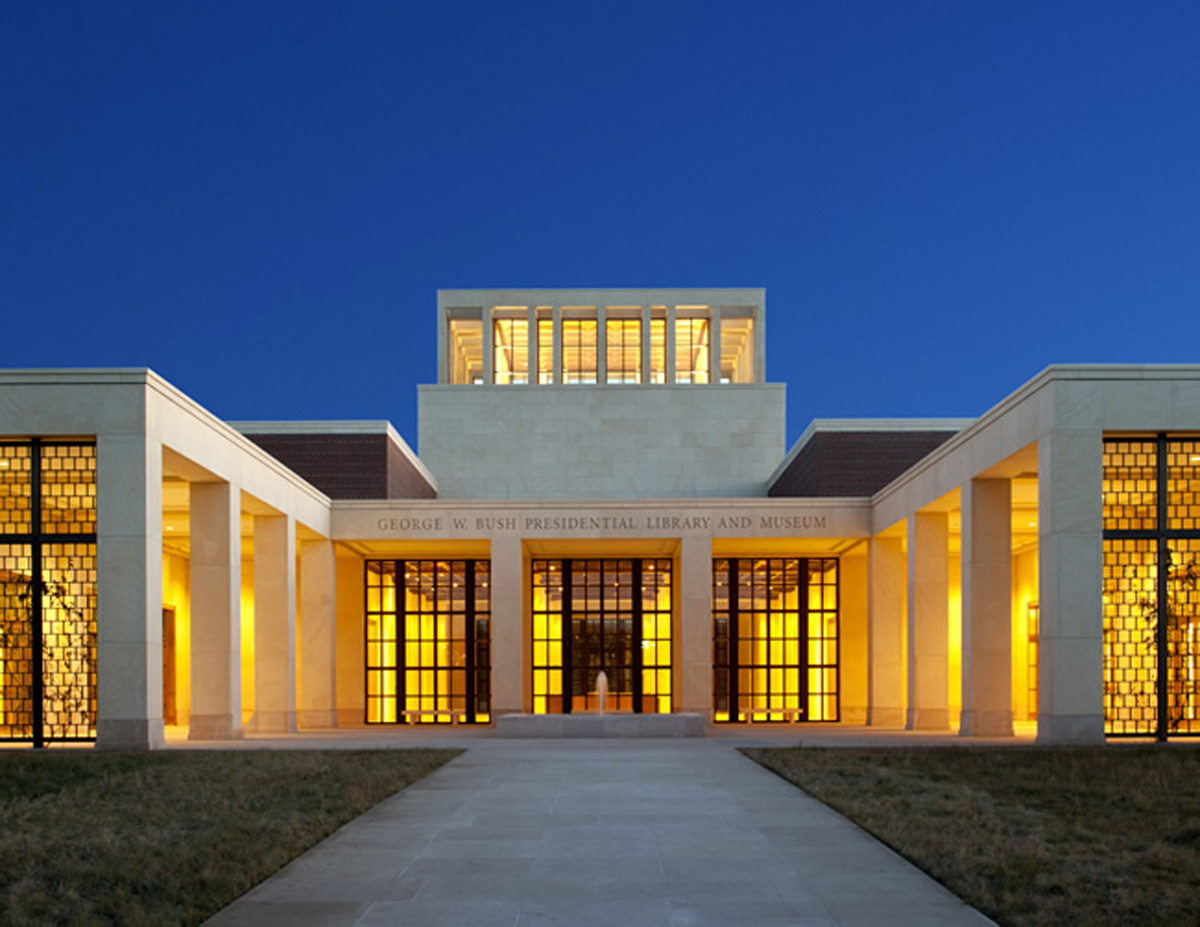 The 23 acre site of the George W. Bush Presidential Center sits on the edge of Southern Methodist University’s campus in Dallas. Completed in 2013, the impressive dedication to the United States’ 43rd President serves as both a museum and library, complete with a replica of the Oval Office during President Bush’s administration and a model of the White House’s Rose Garden, which contains flora suitable for the hot and humid Texan climate.

Inside, the George W. Bush Presidential Center has a museum, a shop, restaurant, and the George W. Bush Institute, which is the public-policy branch of the foundation that focuses on human freedom, global health, education reform, and economic growth. The museum contains an entire section dedicated to September 2001 World Trade Bombings; a steel beam retrieved from the wreckage is featured here. Guests who pass through the galleries also have had to walk through the building’s architectural signature: Freedom Hall. The centerpiece is a cavernous atrium that stretches up 67 feet which is lined with a gargantuan 360-degree LED screen. 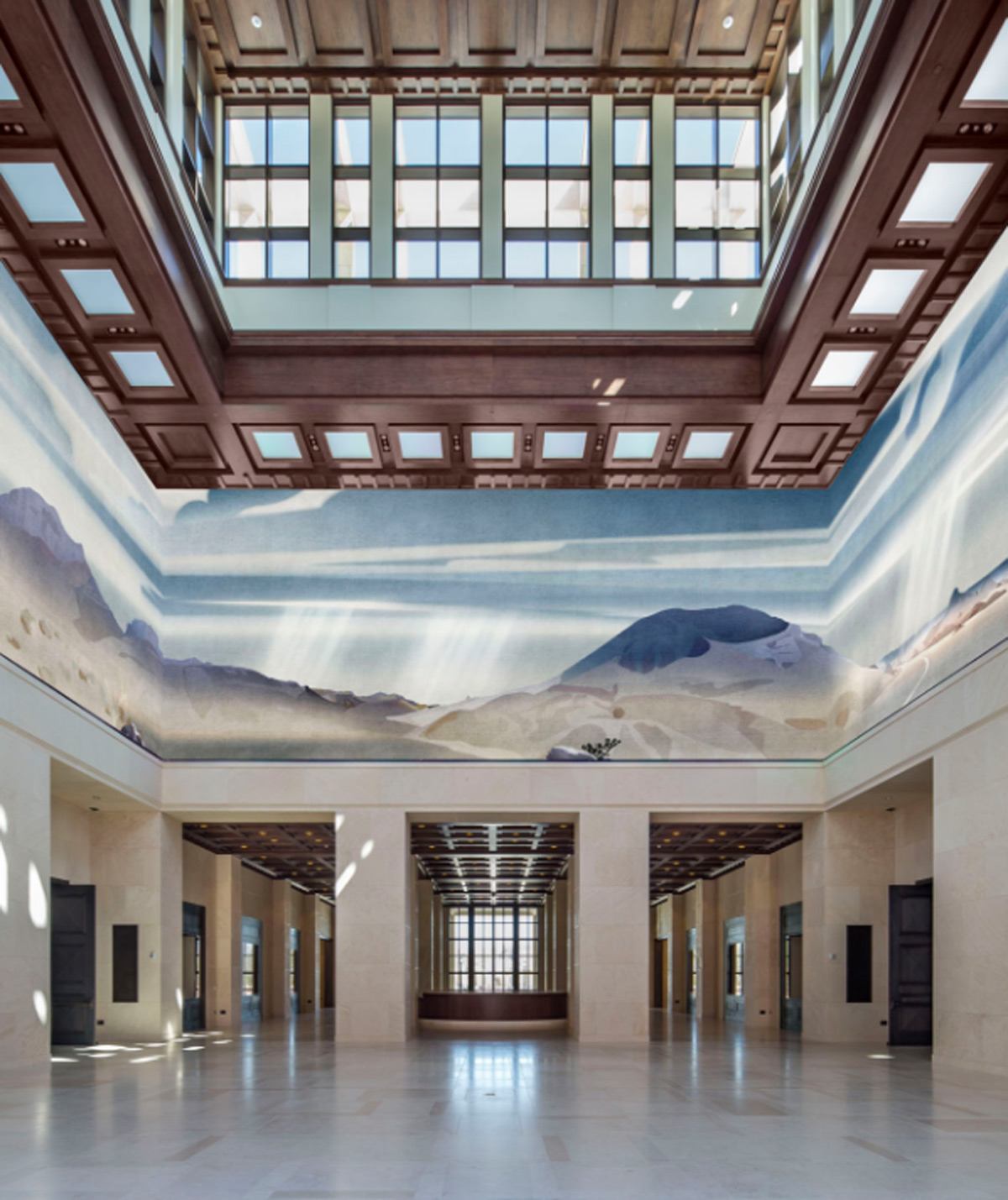 The task of designing the massive structure was taken on by Robert A.M. Stern while Michael Van Valkenburgh Associates, Inc. served as the landscape architect. A design committee dedicated to the preservation of President Bush’s legacy was lead by none other than former First Lady, Laura Bush. 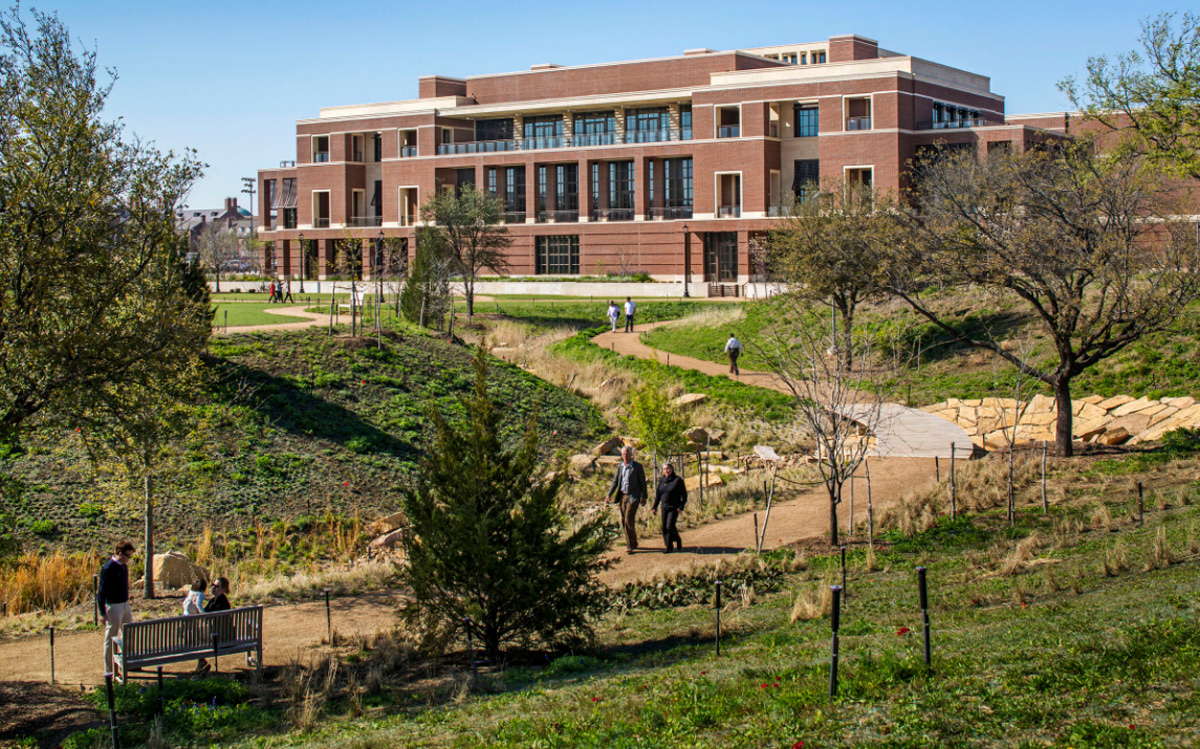 One of the challenges of constructing the center was designing a building that was both classical and modern. It was important to President Bush that the building was environmentally responsible, so with the enlistment of PPG Industries and Dallas-based Haley-Greer Inc., construction for the $250 million project began. The result of these invested efforts manifested itself in a 207,000 square foot, LEED Platinum Presidential Center that sacrifices neither aesthetic or environmental integrity.

The George W. Bush Presidential Center is a broad, flat-roofed, three-story structure made of red brick and Texas Cordova Creme Limestone. As per President Bush’s request that the site be eco-friendly, Van Valkenburg had included water efficient prairie grass, bioswales to remove runoff, and cisterns for irrigation purposes. The building also utilizes 19,000 square-feet of solar panels.

Along with high-performance, low-emissivity glass to maintain a comfortable temperature within the building without having to compromise light transmission, the building also features oversized pre-glazed exterior windows, one of Haley-Greer’s larger contributions to the project. The exterior of the building also included custom-made bronzed and glass doors at the center’s main entrance.

To prevent coat degradation of the building’s exterior doors and metal trim, PPG’s Coraflon® ADS coatings was chosen. Coraflon features Lumiflon FEVE fluoropolymer resin technology, which protects surfaces from UV radiation. In addition to protection against the sun, salt, air, and water, the FEVE technology in Coraflon retains color and gloss, insuring that the doors of the George W. Bush Presidential Center will remain in pristine condition for decades.

Information courtesy of US Glass Mag and PPG.