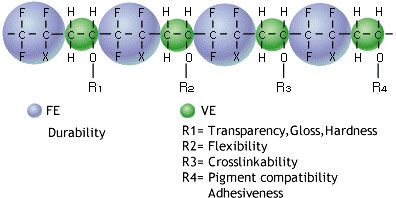 Posted on February 7, 2013February 17, 2021 1 Comment on FEVE Resins Respond To The Limitations of Fluoropolymers in Coatings

Perhaps the best known fluoropolymer resin used for coatings is polyvinylidene fluoride (PVDF). This resin is supplied as a dispersion in a high boiling solvent, usually blended with an acrylic resin at a 70/30 fluoropolymer/acrylic ratio. PVDF is typically applied as a coil coating, requiring processing at high temperatures in a plant setting to successfully form a protective coating. PVDF has been used successfully in architectural coatings for over 40 years, and demonstrates the excellent weatherability achievable with fluoropolymers.

In order to address the shortcomings of fluoropolymers in coatings, unique fluoropolymers known generically as fluoroethylene vinyl ether (FEVE) copolymers were developed in the early 1980’s.

FEVE resins were developed to address the shortcomings of traditional fluoropolymer resins. FEVE resins are manufactured by copolymerization of a fluoroethylene monomer with a vinyl ether monomer.

The unique structure of FEVE resins imparts to coatings made from them the same excellent weatherability characteristic of fluoropolymers. Their durability is derived from the fluoroethylene portion of the polymer. The nature of the vinyl ether groups can be changed to influence other physical properties. Gloss, flexibility, hardness, adhesion, pigment compatibility, and transparency can be modified by changing vinyl ether monomers. Hydroxy-functional groups allow the FEVE resin to be crosslinked using industry standard aliphatic isocyanates to form fluorourethanes. This crosslinking reaction can be run at elevated temperatures or at ambient temperatures.

Coatings made with FEVE resins offer several advantages over other fluoropolymer resin-based coatings. FEVE resins can be used to formulate coatings that cure at room temperature. This means they can be used in field applied maintenance coatings, unlike traditional fluoropolymers which must be applied at elevated temperatures. They can also be used as coatings for temperature sensitive substrates like plastics. FEVE resins can be formulated to yield coatings with a wide range of gloss, from flat finishes to high gloss. Because they are solution polymers, FEVE resins have better compatibility with a wide range of pigments, increasing color options for designers. Fluorourethanes have better hardness and corrosion resistance than some other fluoropolymers, with improved scratch resistance. FEVE coatings offer flexibility to -40o C and below.